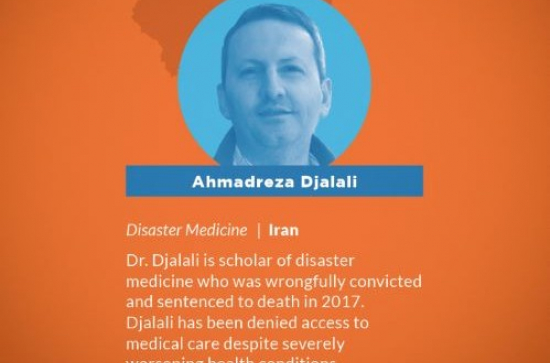 Scholars at Risk (SAR) urges the Iranian authorities to suspend the capital sentence issued against Dr. Ahmadreza Djalali and to secure his immediate release. SAR understands that Iranian authorities recently put Dr. Djalali in solitary confinement and are preparing to carry out his death sentence at any moment.

Dr. Djalali is an Iranian-Swedish scholar of disaster medicine who teaches at universities in Italy and Belgium, including Karolinska University, in Sweden; Università degli Studi del Piemonte Orientale, in Italy; and Vrije Universiteit Brussel, in Belgium. Iranian authorities arrested Dr. Djalali in April 2016 while he was traveling to participate in a series of workshops hosted by universities in Tehran and Shiraz. On October 21, 2017, Dr. Djalali was convicted and sentenced to death for “corruption on earth” (ifsad fil-arz), based on unsubstantiated allegations that he had provided intelligence to the Israeli authorities. Dr. Djalali has disputed the allegations, asserting that his ties to the international academic community are the basis of his prosecution. SAR understands that Dr. Djalali has been denied the right to appeal the conviction and sentence.

“Dr. Djalali’s arrest, conviction, and sentencing flagrantly violate international human rights standards that Iran has an obligation to uphold, including the right to a fair trial,” says SAR Executive Director Robert Quinn. “Iranian authorities have ignored repeated calls from the international higher education and human rights communities to free Dr. Djalali and return him to his family and colleagues.”

According to his family, Dr. Djalali has been subjected to torture and solitary confinement while in state custody. In July 2019, Iranian authorities suddenly transferred Dr. Djalali to an undisclosed detention facility where he was threatened with immediate execution in order to obtain a forced confession. SAR further understands that Dr. Djalali has suffered from a number of severe medical complications, including gastritis, stomach ulcers, gallstones, anemia, depression, and anxiety. He is also suspected of being at high-risk of leukemia, after his bone marrow cells were found to have weakened. Despite these complications, SAR understands that authorities have repeatedly denied Dr. Djalali proper medical care.

According to Mr. Quinn, Dr. Djalali’s situation should raise grave concerns for scholars and society everywhere. “Beyond the unimaginable abuse Dr. Djalali has suffered and the years-long nightmare his family has been forced to endure, the wrongful prosecution and imprisonment of researchers like Dr. Djalali endanger our collective ability to conduct academic work and provide society the benefits of scientific inquiry and exchange,” says Mr. Quinn. “SAR calls on government and university leaders and all those who value academic freedom to press Iranian authorities for Dr. Djalali’s immediate release.”

Previous Post
Call to Action in Support of Scholars and Students in Belarus
Next Post
Call for Papers: Special Issue on Academic Freedom and Internationalisation
This website uses cookies to improve your experience. If you continue to use this site, you agree with it.