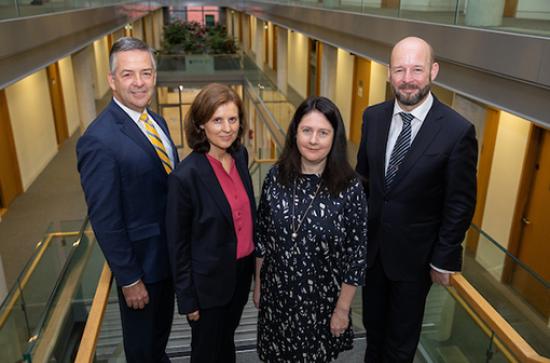 Maynooth, October 14, 2019: A new EU-funded initiative to support researchers at risk is today being launched by ten European partners at Maynooth University, Ireland. The initiative, InSPIREurope, is a Europe-wide alliance for researchers who are at risk due to discrimination, persecution, suffering or violence.

Funded under the European Commission’s Marie Skłodowska-Curie Actions, the initiative is hosted at Maynooth University in Ireland, and coordinated by Scholars at Risk Europe.
As record numbers of researchers reach out to Europe for support, no one country, government, NGO, or enterprise can meet the scope of the challenge. The ambitious and coordinated approach of InSPIREurope is required to provide that support.

From September 2018 to the end August 2019, over 580 scholars and researchers sought the assistance of Scholars at Risk. The organisation successfully placed 115 scholars at universities globally. The highest rate of applications came from Turkey, Syria, Iran and Yemen.  Over 1,000 applications have been received from Turkey alone since January 2016.

Prof Philip Nolan, President of Maynooth University, said: “Maynooth University recognises the central importance of academic freedom in scholarship, research and teaching for the promotion and protection of democracy. Together with our European partners, we recognise our shared responsibility to support scholars who are at risk due to discrimination, persecution or violence. With this ambitious Europe-wide initiative, we hope to make a difference.”
InSPIREurope brings together a diverse set of partners in a concerted effort to expand support for researchers at risk. InSPIREurope begins from the view that excellence in research depends upon open scientific debate, and is driven by a multiplicity of ideas, people and perspectives. When researchers are at risk, and excluded from participating in the global research circuit, whether due to discrimination, persecution, suffering or violence, not only are individual lives and careers at risk; the quality, and the very future of research is also at stake.
Both the skills and attributes of researchers who are at risk represent significant human capital and economic potential for the receiving countries in Europe. However, well-coordinated efforts by a diverse set of experienced partners are required for such potential to be realised on a Europe-wide scale.
European partners today join forces to announce the launch of InSPIREurope, in recognition of a shared commitment to excellence in research and to the principles of freedom of inquiry, and academic freedom that are essential for world-class research.

The project partners include:

Previous Post
InSPIREurope at Maynooth University supports scholars at risk of persecution
Next Post
Inspireurope newsletter 1 (September 2019 – February 2020)
This website uses cookies to improve your experience. If you continue to use this site, you agree with it.